What is a data center fabric?

What is data center fabric?

In this modern data center architecture, network devices are deployed in two (and sometimes three) highly interconnected layers, represented as a fabric. Unlike traditional multitier architectures, a data center fabric effectively flattens the network architecture, thereby reducing the distance between endpoints within the data center. This design results in extreme efficiency and low latency.

Data center fabrics of all kinds share another design goal. They provide a solid layer of connectivity in the physical network, and move the complexity of providing network virtualization, segmentation, stretched Ethernet segments, workload mobility, and other services to an overlay that rides on top of the fabric. The fabric itself, when paired with an overlay, is called the underlay.

Organizations that move beyond monolithic applications also adopt an agile IT approach, where they deploy applications more quickly in smaller steps and respond to transport requirements that can change rapidly. Also, many organizations are moving to virtualized workloads, such as containers and virtual machines, to support rapid shifts in capacity over time on a smaller set of physical servers.

How Does a Data Center Fabric Work?

Modern data center fabrics typically use a two-tier spine-and-leaf architecture, also known as a Clos fabric. In this fabric there are typically three stages, as data passes through three devices to reach its destination. For example, east-west data center traffic typically travels upstream from a given server through a leaf device to a spine device, and then downstream through another leaf device to the destination sever.

In a fabric design, there isn’t a network core, which changes the fundamental nature of the network itself.

The scale of a spine-and-leaf fabric is constrained by the number of available ports.

On the leaf devices:

On the spine devices:

However, adding capacity to a spine-and-leaf fabric is easy. You simply add more spine or leaf devices as needed alongside the existing devices. This approach allows a spine-and-leaf fabric to “scale out” in the same way servers and services do—by adding more devices in parallel. This contrasts to “scaling up” by adding more capacity in existing devices, as in a traditional hierarchical design.

Beyond increasing port capacity, you can also increase overall fabric scalability by creating multiple spine-and-leaf fabric pods and interconnecting them with an additional spine-like layer. 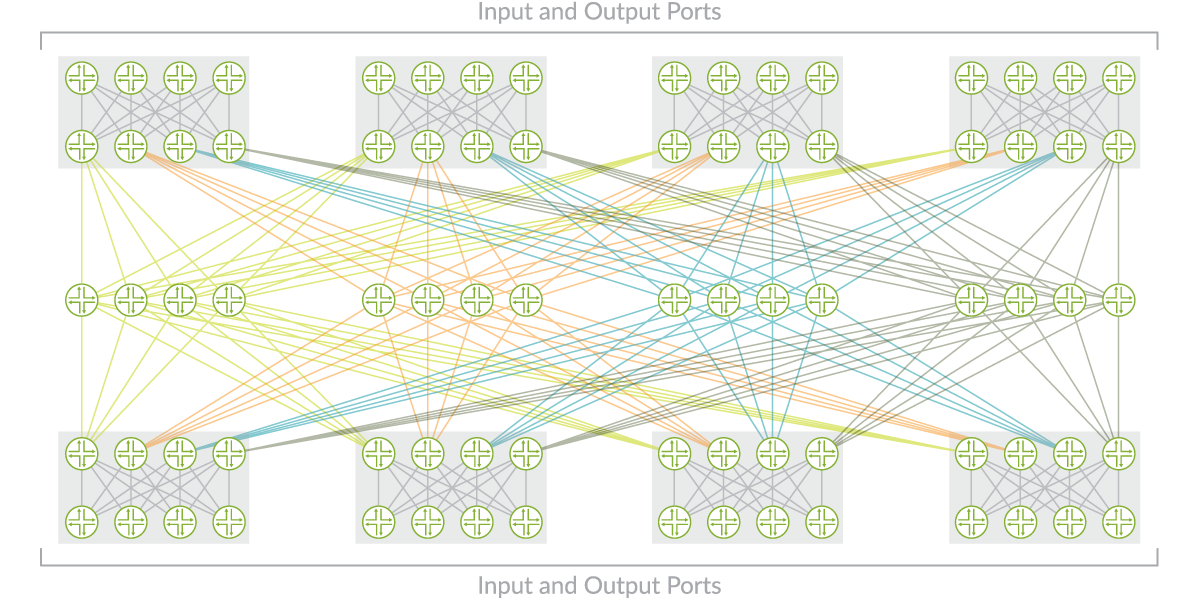 Example design for a large-scale fabric.

This pod-based design has advantages in large-scale data center fabrics.

What is a data center switch fabric?

What is the difference between a data center fabric and a traditional network?

The term “fabric” describes how switch, server, and storage nodes connect to all other nodes in a mesh configuration, evoking the image of tightly woven fabric. These links provide multiple redundant communications paths and deliver higher total throughput than traditional networks.

Are there different types of data center fabric architectures?

Yes, there are both proprietary architectures and open, standards-based fabrics, such as EVPN-VXLAN.

This type of fabric is an overlay network that sits on top of an IP-fabric underlay. It enables the extension and interconnection of Layer 2 data center domains and placement of endpoints (such as servers or virtual machines) anywhere in the network, including across multiple data centers.

What data center technology, solutions, and products does Juniper offer?

Learn about EVPN-VXLAN
Related Content
RESEARCH TOPICS
What is EVPN-VXLAN?

RESEARCH TOPICS
What is VXLAN?