Simple Network Management Protocol (SNMP) is an internet standard protocol for collecting and organizing information about managed devices on IP networks and for modifying that information to change device behavior. SNMP is widely used in network management for network monitoring. SNMP exposes management data in the form of variables on the managed systems organized in a management information base (MIB) which describe the system status and configuration.1

The 128T implementation of SNMP relies on the snmpd process running within the host operating system. All configuration for SNMP, however, is done within the 128T's data model via its administrative interfaces (e.g., PCLI, GUI, etc.).

128T provdes MIB files that describe the 128T SNMP objects and traps available on the 128T device and how they are encoded. For ease of use, these are installed on the device itself in this location

A Network Management System (NMS) can import these MIBs when managing the 128T appliance. On a Centos based NMS the latest mibs can be optionally installed by downloading the latest "128T-mibs" package from the 128T yum repoisitory.

In order to install the 128T MIBS on another platform, a valid certificate and yum repo file must be present on the platform in order to obtain the file from the 128 Technology repository.

The specific objects available in the MIB are described in more details in the the section MIB Layout.

The protocol configuration requires three settings: setting enabled to true enables the SNMP agent on your 128T. You must also set the protocol to v2c (SNMPv2c is the only version of SNMP supported by 128T). Finally, configure the port on which the SNMP agent will listen for inbound requests; this is typically 161, the well-known port for SNMP agent requests.

The access configuration lets you create a set of "allowlist" addresses allowed to interact with the 128T SNMP agent (i.e., to send GET requests to the 128T). This represents your SNMP management platform.

The access configuration, configured within access-control in the snmp-server element, has three components:

Iif you intend on polling the 128T device via one of the managed interfaces (i.e., one that is configured within 128T as a forwarding interface), this will require additional configuration steps. This in turn may affect the source address that the SNMP daemon sees as requests arrive. See the section below on Polling SNMP.

The notification receiver configuration defines where the 128T will send SNMP information in the event of a system issue. This is configured within notification-receiver in the snmp-server element. Like the access configuration, it too has three components:

Once the snmp-server is configured, the 128T device is eligible to be polled for SNMP requests from any source identified in an access-control configuration. Depending on your system architecture, this may require some additional configuration for polling to be successful.

This also applies to traps sent by the 128T to the notification-receiver.

When sendiing responses via a forwarding interface (as described below), the 128T software manages the Linux routing table rules on your behalf.

The 128T MIB Database tree is structured as shown in the following diagram: 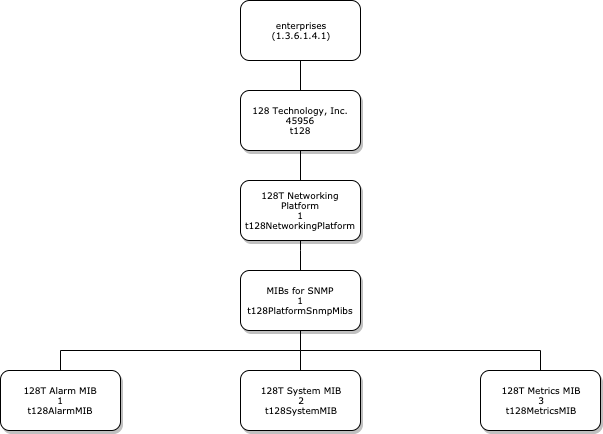 Note that the SNMP MIB objects only support read-only access (eg: GET, GETNEXT). To configure or alter the system it is necessary to use user-interfaces like PCLI or Web GUI or configuration APIs (eg: NETCONF).

The netconf configuration API is not applicable to version 5.3 and later. NETCONF controls have been replaced with REST API controls, with no loss of functionality.

The MIBs are described individually below.

The parent T128-MIB defines the overall structure of the MIB and supported products. Only the t128NetworkingPlatform currently exists, however future MIBs may expand this to other 128T products.

The T128-ALARM-MIB defines objects that describes the state of 128T alarms. The MIB also contains definitions for the SNMP trap notifications sent out by the system on event of an alarm being added or cleared.

There are two tables for viewing the current alarm state, t128AlarmTable and t128ShelvedAlarmTable. Each row in this table represents a unique alarm that is active in the system. The t128ShelvedAlarmTable represents alarms that are shelved (for instance if the router is marked as being in maintenance-mode). The t128AlarmTable represents current alarms that are active and not shelved. The key for each row is an instance identifier string, either t128AlarmTableInstanceId or t128ShelvedAlarmTableInstanceId depending on which table the alarm resides. This string can be used to indicate a specific instance of an alarm, for example "Interface operationally down on eth0", which would be a different instance than a "Interface operationally down on dpdk1" alarm. This instance identifier should be considered an opaque string (i.e. the contents have no meaning other than that for each alarm this string is garaunteed to be unique).

The opaque instance identifiers are currently implemented as hex strings however the implementation may change from release to release so the exact content should not be relied on.

The t128AlarmNotification definition defines the alarm trap sent out by the system and contains the relevant objects to describe the alarm (e.g. source node and router, severity, alarm message, etc). The trap will also contain a unique t128AlarmInstanceId that can be used to correlate the alarm with the t128AlarmTable and t128ShelvedAlarmTable instance identifiers. If an alarm moves from a shelved to unshelved state or vice versa the instance ID will remain the same.

The 128T-METRICS-MIB provides SNMP access to the expansive set of metrics provided by the 128T product which are exposed via the t128MetricsTable.

Below is an example of an SNMP query of the t128MetricsTable showing the 4 rows returned for each CPU utilization data series:

The metrics table can be configured to contain any of the 128T metrics that can be exposed via SNMP however this is an advanced feature and is outside the scope of this document. By default a small set of the most useful metrics are configured in the t128MetricsTable.

The T128-SYSTEM-MIB contains objects to describe the running state of the local 128T system.

The local node and router name, role and asset-id objects (t128RouterName, t128NodeName, t128NodeRole and t128AssetId) can be used to identify the system. The values of these parameters will match those in the 128T system configuration.

There are several processes running on the system that comprise the 128T product. The table t128ProcessTable provides details about these processes, for instance whether they are running or, if applicable, are assuming a leadership role. The key for the table rows is the process name, for example "nodeMonitor".